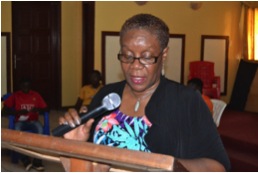 NEC Conducts Workshop on Gender and Disabilities in Elections

The National Election Commission (NEC) has begun the conduct of a string of workshops for electoral stakeholders on Gender and Disabilities in the Electoral Process.

The first in the series of workshops was conducted last week in Zwedru, Grand Gedeh County and brought together more than one hundred participants from five counties in the South Eastern Region.

The Gender and Disabilities in the Electoral Process Workshop is geared towards increasing the participation of women and people with disabilities so that they can have a voice in the political processes in the country as well as enhance their understanding that political participation in democratic processes is fundamental to addressing the socio-economic inequalities associated with marginalization.

At the workshops, participants are being taught that people with disabilities can play the same role as other citizens in activities a such as voting, running for office, advocating for policies, serving as poll workers, elections monitors and campaigning for candidates, among others.

The workshops which are being funded by the USAID through the International Foundation for Electoral Systems (IFES) will also be held at other locations across the country, including Voinjama, Lofa County, Robertsport, Grand Cape Mount County and Buchanan, Grand Bassa County.